has trouble displaying over 19 shield
Roll, Reroll, Select, Buy, Leave all seem like they're on the wrong button when I try to play fast.

Really fun game. If there were ever a larger version of the game, having several paths you can go down might make things interesting since it can feel just random with little to no control over the process.

Kinda sad that buying maximum dice roll doesn't work, never rolled above 6. I also feel like having the board be random too doesn't help, you have no control so it's not fun randomness and if you're unlucky you can completely miss out on upgrades either through having no shop or having no fights to get gold.

The attack buff should also definitely tick down at the end of next turn and not end of that turn, at least if you had no buff prior, cause getting 1 on a buff means you essentially do nothing.

I also feel like the base value of actions (and health/damage of ennemies) should be higher so that you don't feel like you're just skipping a turn if you get less than 3 and rerolling would be more interesting that way as you'd still lose some power but with some guaranteed base damage/shield/etc, you would be more inclined to fish for specific effects (that's kinda the case already when you get an upgrade but I feel that should be the default, it just feels much better)

Did I miss how to equip different dice that you buy from shops or does it just not work atm? Bought one that says 'deal damage to all enemies' but never rolled it throughout the entire run :( Am I just unlucky?

Other than that though it's been a lot of fun! Thank you very much for making this :D

Maybe you clicked X instead of Z, thus leaving the store? I should honestly improve this part a bit.

Pretty sure I lost that gold^^'

Hi! I loved the game, what a great rougelite! I have a few questions is it possible that I could contact you over email? Mine is tinybossman@gmail.com if  you'd like to.

You know what I love about this game? It's strategic, but doesn't overload you with options. Each choice you make is a pretty binary choice (re-roll or don't) but at the same time isn't brain dead. There's a lot of luck, but it feels that can be overcome by good decision making. It was a lot of fun! Thanks for making it, FeatureKreep!

Good game but the game is too luck based, the fact that i got soft locked by plague doctors because the chances of having a high number on a  dice is BS.

Hey, thanks for the feedback! I've just uploaded a new version with more balanced encounters and enemy behavior (plague doctors have lower health and will once in a while go into wait mode). Plus, you now have a devastating super ability that recharges with every reroll.

I plan to add more things down the line to counteract the unfairness of rolls, such as usable items. Let me know if you're interested in trying it out again.

I wish you could reroll movements at a cost, got to the boss fight at the end only hitting one shop and one blacksmith. Lost due to low rolls for attacks on the plague doctor while kept healing all damage as the boss went to town on me.

I'm fixing that for the post-jam build. Haven't exactly found the right solution, possibly mandatory shops that you can't pass through without going into?

I do like the game and think its a unique concept but I ran into a slight problem.

I encountered two of those plague doctor enemies at the same time and I was nearly softlocked for 20 minutes because I couldnt DO anything against them. they kept healing eachother to undo all the damage I did.

I had to fight against the RNG to get the the EXACT roll with the EXACT buff to get passed them.

I am one for difficulty in games but the problem is that, since the healing enemies dont attack, I couldn't even die to progress.

This game is very fun. Good job. My only complaint is that the movement is too random a d-3 for movement would help . I played a run where I got zero shops and 1 forge and then the next run I got 4 shops/forges in a row with only 150 gold to spend.

Very fun and interesting gameplay. Keep up the great work!

10 minutes later, still listening to the music. It is so good it's almost a crime. Please upload it somewhere.

Please follow Retro Asobi, the composer for Dice Souls! He really did an awesome job.

I am 4 parralel universes ahead of you ;)

Amazing game I really liked it. Only thing is there is a bug, when you press x really quickly just after the dice roll the game can froze other than that and a bug that you can roll the dice twice it is amazing. I enjoyed it.

oh, this is amazing! Really like the artstyle and the music and the game is mostly mechanically solid. My one complaint is that battling against a squad of healers is a real time waster... they have no way of damaging you, nor do they let you pass...

Lots of fun, a bit sad that I got to the boss with 1k in the bank and no way to spend it though.

Love this, it was so fun! Lots of strategy too.

This game makes rolling dice surprisingly fun. It's also very polished and has a lot of features for a solo dev jam game.

Amazing game. It feels dicey sometimes but I got through it after a bunch of tries.

amazing game, my fav so far!

Really great game! I'll admit I was frustrated into almost quitting at first, but I'm glad I stuck with it. Runs where the luck just doesn't go your way were frustrating, but it just makes getting on a good run that much more tense. The ability to control your randomness via rerolling and replacing faces of your dice gives the game a different kind of strategy, more about hedging your bets than devising the perfect plan. I also really like how you could abuse encounters to farm health if you knew what you were doing.

I will admit that I was only able to beat the game by abusing what I assume was a bug where you could reroll your number by pressing the button really quickly after the initial roll before it switches to the other die. However, I actually really like the bug and think it would make a good mechanic; it forces your to make a split second decision about whether the number is good enough, and you can potentially screw yourself over by getting a lower number.

Also, for those curious, my final winning loadout was two defends, one attack, one attack all, one double attack, and the shield which gives you +3 to your defend rolls (no sword upgrades used) 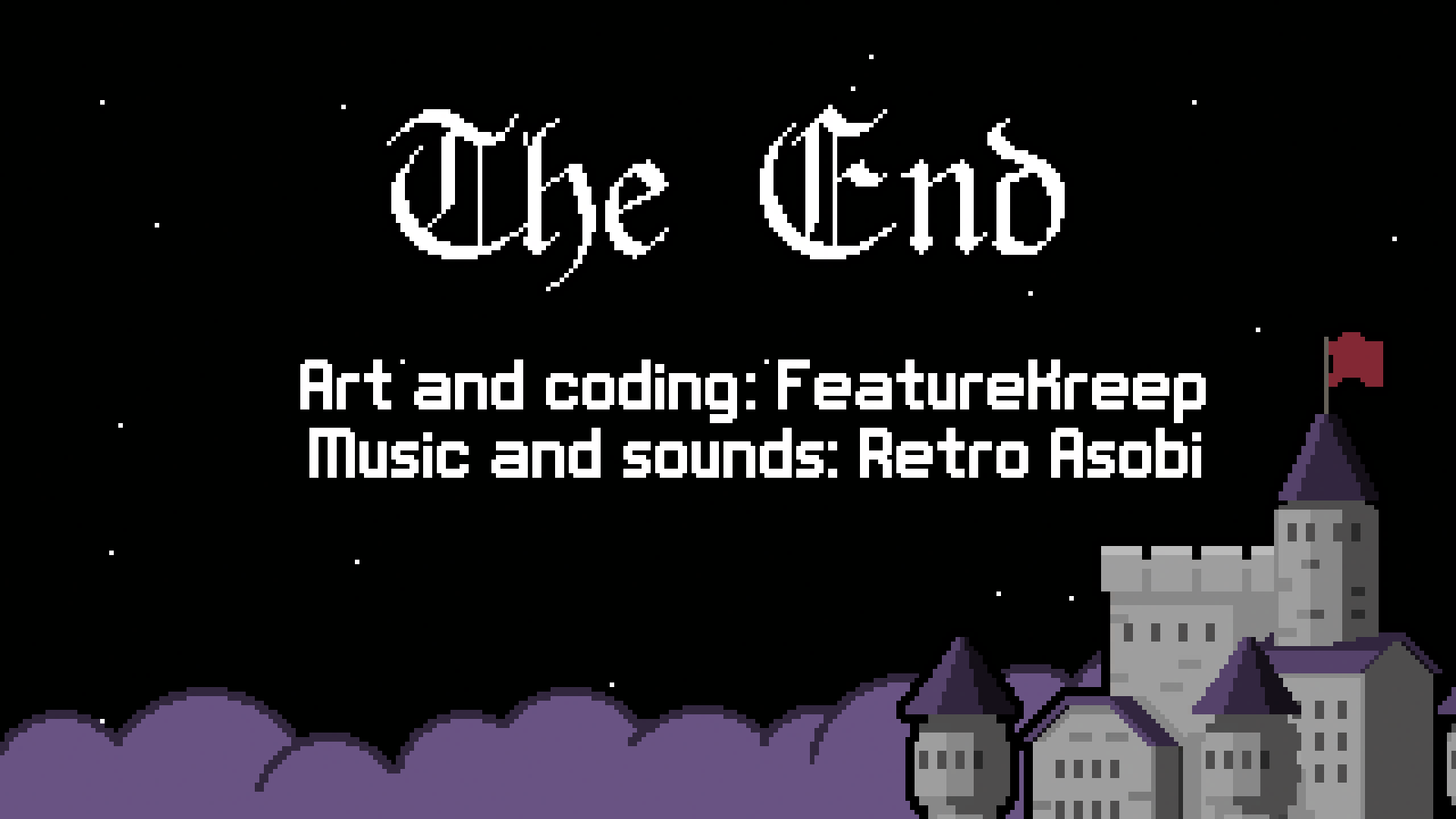 Thanks, this was a fantastic read! I'm glad you gave the game a second chance despite its outright unfairness (even for a roguelike) and even managing to turn the tables on it.

I will update the game some time after the GMTK Jam ends and fix a couple of the more annoying issues. Your feedback is greatly appreciated, thanks again!

Really great game. The music and art are a nice fit, and it's a nice gameplay loop. Nice job!

This is really cool... Amazing work!
Just one minor comment - maybe for each turn, if the dice would have become blank, it would be clearer that you have to throw the dice again... I was confused as I saw the attack symbol but couldn't attack until I jumped...
But otherwise, brilliant concept.

AWESOME GAME! it is simple and really fun

Nice game! It feels fresh, original and I had fun even tho I wasn't good at it.

Haha, yeah, I found this bug too. At this point, it might as well be a speedrunning tech.

Do you think the jam demands a lot of balance due to the randomness?

Yeah, there were a lot of planned features I had to cut at the last moment. I even wanted to add different classes! But oh well, I think I managed to do a lot in 48 hours.